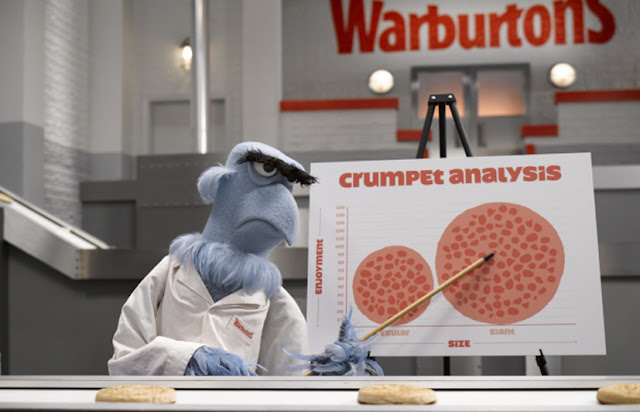 One of the most exciting/annoying (delete as applicable) things about the festive season is the plethora of new TV adverts that are produced at this time of year.

Some people love them and look forward to finding out what their favourite store will use as its theme for their Christmas advertising campaign. The obvious example is, of course, John Lewis, who always produce the most highly anticipated TV advert each year.

Other campaigns that customers always watch out for include Marks & Spencer, Boots, Debenhams,  Sainsbury's, and Tesco.

And in the last few years, even the cut price supermarkets such as Aldi and Lidl have produced interesting high budget advertising campaigns, that have won plaudits from the marketing industry.

I recently saw a ‘Top 10’ list of the 'best' Christmas adverts for 2016. The list had been compiled by a (so-called) marketing expert. But it shocked me that the 'expert' had put the John Lewis TV advert at Number 1 in the chart.

In my opinion, this year’s John Lewis TV campaign is a complete disaster. I will explain why a bit later on.

This isn’t the first time that John Lewis has messed-up their Christmas marketing. Last year the highly anticipated John Lewis TV advertising campaign was a complete flop, with their so-called ‘Man on the Moon' campaign, featuring the story of a lonely old man living on the moon, featuring a cover version of the Oasis song ‘Half the World Away’.

OK, it was very clever and very touching. It certainly tugged the heartstrings. But it was also a marketing disaster.

Despite its cleverness and its high-budget classy feel, it made customers feel sad and guilty. It intentionally reminded them of the loneliness of Christmas for some sections of society, especially for elderly people.

Now obviously it's a good thing to highlight the issues of loneliness amongst elderly people at Christmas, and John Lewis should be commended for this. But ultimately the advertising campaign failed because customers don’t want to be put on a guilt-trip, especially at Christmas. And customers certainly don’t want to be preached to, in a condescending way. Especially not by a high-end department store who are plying guilt-trips, while raking in the profits.

In my opinion, the best Christmas TV advertising campaign of last year was the Warburtons crumpet adverts featuring characters from The Muppet Show. It was a funny feel-good advert that reminded Warburtons' core customers of their youth, and of the brilliant Muppet Show. It really made me want to go out and buy their giant crumpets!

After several years of tear-jerker-guilt-laden Christmas advertising campaigns that tug on the heartstrings, consumers are now changing at an emotional level. They are more interested in having a bit of light-relief at Christmas. The technique that John Lewis has used in all their recent Christmas marketing campaigns is now regarded as passé and over-sentimental.

People no longer want to see a tear-jerker storyline, backed by an edgy indie-pop dirge, sung by an angst-ridden solo artist who sounds like they are about to top themselves.

It's simple really. The British consumer wants advertising that makes them feel good during the festive season.

If John Lewis had wanted to do something useful for elderly people last Christmas, it would have been far better just to have donated some of their vast profits towards Age UK, rather than making a TV advert that feels more like an appeal for charity donations than an advert for Britain’s leading department store.

What about this year's TV advert?

So what about this year's John Lewis advert? They have again created another clever campaign using a character called ‘Buster the Dog’ who gets his kicks from bouncing up and down on a child's trampoline! And let's not forget the cute foxes and the hedgehog! So far, so good.

They have clearly learnt their lesson and have made a TV advert that is more upbeat and fun than their ads have been over the last four years.

Literally less than 24 hours after the advert was given its debut, parents were complaining in their droves about the ad. In case you haven’t seen the full version, the 'problem' is that the father is seen to be constructing a trampoline during the night, while the little girl is asleep in bed on Christmas Eve.

This poses a massive question: Why is the father doing this? Surely it is Santa Claus who brings the trampoline during the night, with a little help from his reindeer?

The day after the ad was launched, a tsunami of angry parents pointed out this schoolboy error. And then the advert wasn't seen on TV for about 10 days.

Then lo and behold, a badly edited version of the advert started appearing on our TV screens, that didn't feature the first 20 seconds, and therefore ruined the entire storyline for anyone watching it.

Maybe I've been watching the wrong TV channels, but I can honestly say that I've only actually seen the John Lewis advert about three times in the last few weeks. And even then it was only the much shortened version which, thanks to the editing, is now simply boring and pointless.

They won’t admit it, but John Lewis has been forced (by customer pressure) to edit their ultra-expensive TV advert, to the point at which it is now just a lame duck, floating aimlessly in a sea of festive marketing.

So what went wrong?

It's pretty obvious really. Some over-paid advertising executive (stripey suit, BMW, red braces, red spectacles, goatee beard, pony tail) sat drinking Peruvian blend in an office in Soho, came up with what they thought was a stonking good idea for a TV commercial.

And then the John Lewis marketing team committed the greatest sin in the business book. They agreed to go ahead with the idea without first doing enough proper market research. Hashtag Epic Fail.

All they had to do was ask a few real parents (in the real world) what they thought of the advert. They would have then got the right answer straight away: that this advert was not going to be usable in its entirety, because any child watching it will ask: “Why is the daddy putting up the trampoline? Where is Santa Claus?”

So, for two years in a row, John Lewis has spent vast amounts of money on creating advertising campaigns which have been abject failures from a marketing perspective. And in both cases, the failure can be put down to them not doing appropriate market research before launching their campaigns.

The lesson from all of this is very simple. Don't do any marketing or promotional work until you have asked your customers what they think. Clever marketing is only clever if the customers like it and, more importantly, act upon it.

And finally, just in case you're wondering what I think is the best TV advert this Christmas, then you'll have to click on the link below to find out.