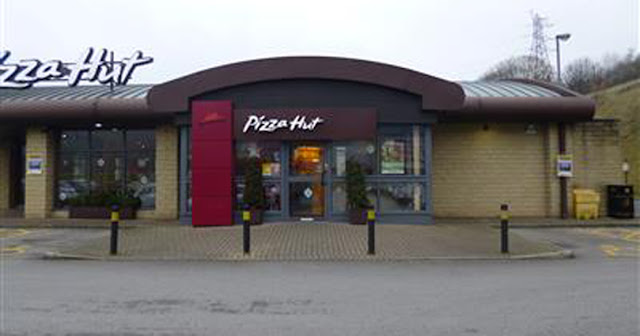 A few months ago, myself and my partner visited a well-known chain of pizza restaurants for their lunch time buffet. It's not the sort of place where we would normally eat if we wanted a proper Italian pizza, but it's fine if you just want a quick cheap lunch.

The service was good. The food was OK, bordering on mediocre. But considering the price, it was reasonable value for money. No major complaints so far.

But one thing about the experience was bad. And I mean very bad.

The place was absolutely filthy. The floors were covered in bits of salad, pizza crust, serviettes, and various other debris left to fester all around us.

But worse was to come. The knives and forks were dirty, with bits of old food encrusted on them. There was other cutlery already set out on other tables. So we grabbed those instead, only to find that these were also filthy. In fact we went through numerous sets of knives and forks, and the whole lot of them appeared to be dirty.

But the worst horror was still yet to occur. When I went to the salad bar to get a bowl of salad, I found that already-used plates had been mixed up with clean plates. In fact they had all been stacked up on top of each other, so it was impossible to tell which plates were clean and which ones had already been used by other diners. YUK!!!

To be quite frank, the whole place was disgusting.

We asked our waitress if we could speak to the manager about the various hygiene problems. After a quarter of an hour, the manager came over to our table and we went through all the issues relating to cleanliness and food safety.

(At this point, I need to explain that my partner knows more than a thing-or-two about food safety. I won't go into the details here, but it’s suffice to say that the restaurant manager was very lucky that my partner was on a day off work).

To be fair to him, he was extremely apologetic. In fact he was apologetic to the point of obsequiousness. Not only was he ultra-apologetic, he also gave us a free meal that day AND also £20 worth of vouchers for a future visit. He told us that the £20 of vouchers were so that we could come back to “give the restaurant a second chance.”

And so a few days ago…

We decided to give them a second chance as the manager had asked. So we returned to the restaurant armed with our £20 worth of vouchers. And the result? The pizza was surprisingly quite tasty. And we were also very impressed by the high quality of service by the waiter and waitress who looked after us.

But just one problem. Despite the gap of three months, the restaurant was still really dirty. The toilets were dirty. The floor was strewn with food and all sorts of other rubbish. The salad bar was a complete mess. In fact the place was only slightly better than on our previous visit a few months earlier.

We were prepared to go back to this restaurant to give them a second chance. The £20 vouchers had been a nice gesture, and without them we would definitely not have gone back.

Some good advice on customer bribes

The restaurant manager gave us the vouchers as a sort of ‘bribe’, so that we would give the restaurant a second chance. But it was a completely pointless exercise, because the problem that led to our complaint had still not been resolved.

So will we go there a third time? Absolutely not.

The whole point is that if you're going to offer some kind of ‘bribe’ to your customers to make up for a service problem, then you had ALSO better make damn sure that you resolve the actual problem as well. Otherwise you are just throwing money away.

Giving financial incentives alone does not buy customer loyalty or solve a customer service problem. It is an ‘elastoplast’ solution, that is merely treating the symptoms of the problem, rather than curing the disease.