Do Debenhams give a damn? 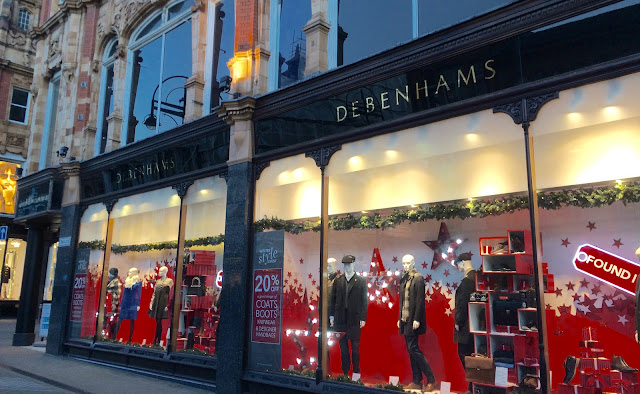 On Christmas Eve I did what most British men do. I panicked.

Had I got the right pressies for my partner? Would she like what I had bought her? Had she already read the book? Does she like that type of chocolate? Does she use that type of nail file? Does Anne Summers allow you to exchange products? You know the sort of thing I mean.

To be on the safe side, I decided to get her an extra stocking filler. A bar of her favourite French soap from a well-known company based in Provence.

So off I trotted to my local branch of Debenhams to make the purchase. Now aside from the obvious problem (...my manly reluctance to pay £8 for a bar of soap...HOW MUCH!?!?!!?) there was also the far greater conundrum of trying to get the attention of an 18-year-old shop assistant, who clearly doesn't want to waste time on a 51 year old bloke, unless he is spending big bucks on a Chanel Number 5 gift set.

So I hovered around the relevant stand for a while, hoping against hope that someone would come and say "can I help you sir?" But despite numerous blonde air-heads hanging around the store with nothing to do, none of them could be bothered to approach me and ask if I needed help.

In particular, I noted two young shop assistants standing less than ten yards away from me, deep in conversation about the party they were going to that evening. They could clearly see that I needed help, but neither could be bothered to approach me. I waited a few minutes listening to their banal conversation, and then decided enough was enough; I left the store to buy the soap elsewhere.

But the story doesn't end there. Because as I was walking to an alternative department store, I suddenly remembered another really bad customer service experience I had suffered in Debenhams a few years earlier.

This incident involved a watch that my partner had bought me from Debenhams. The watch had become faulty within less than a week of purchase, and we had taken it to back to the store for an exchange. The shop assistant had been incredibly rude to us, arguing that there was nothing wrong with the watch, when we were able to prove, without any doubt, that it was faulty.

Two Strikes and You're Out

The point that I'm leading up to, is that when you suffer a bad customer service experience, it doesn't leave your brain forever. It always stays dormant in the back of your mind, ready to spring up again when something reminds you about it.

If you are running a business, then you can sometimes get away with one isolated incident of bad customer service. So long as you act quickly and solve the problem effectively, then customers will usually forgive and forget.

But if you deliver two bad pieces of service to the same customer, then it is virtually impossible to win that customer back. Ever.

So next time I want to buy some overpriced French soap, I am going to a different department store. And the only way Debenhams can now ever win me back is by offering much lower prices for the same item.

And as we all know, that is a slippery slope to business bankruptcy.