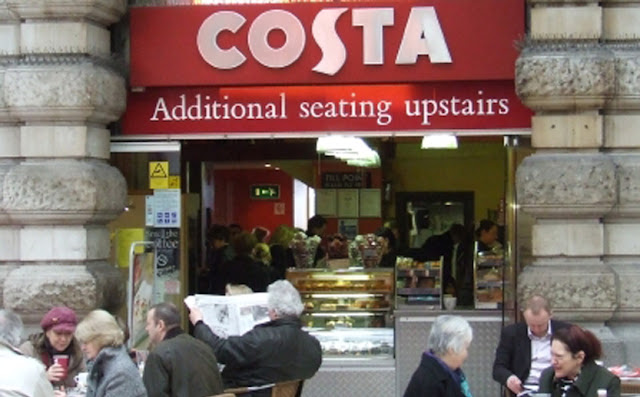 At the Customer Service Blog we believe that providing exceptional customer service makes good business sense because it leads to a higher level of customer satisfaction, which in turn results in long-term customer loyalty and higher rates of customer retention.
So primarily we are concerned with how the customer views an organisation at an individual level, and how that ultimately impacts on profitability
But in addition to how individual customers view an organisation, customer service can also sometimes have an impact at a much wider level. This is where the discipline of ‘Public Relations’ (PR) comes into play. For example, if your company provides very good (or bad) customer service, this may have an impact on its wider reputation amongst the general public, including people who are never actually going to be customers.
With this in mind, I recently spotted a fascinating article about a PR disaster involving Costa Coffee written by Shané Schutte. The article perfectly illustrates how poor customer service can get very widespread media coverage, and have a negative impact on the wider reputation of a company. I have reproduced an edited version of the article below.

Costa is back in the news, and unfortunately it's not because of reputation recovery efforts. Instead, staff have decided to show that the company - and National Rail - would prosecute kind behaviour.
Reputation recovery efforts should mostly be composed of three basic fundamentals: (1) show you plan to tackle the issue, (2) make note that you care for society, and (3) ensure brand ambassadors and staff help boost your brand instead of making matters worse.
Costa staff don’t seem to have received the memo, further dragging the company’s name in the mud after a BBC investigation found “faecal coliforms” in iced beverages. But not even a month has passed and Costa is back in the news - for its ‘brand ambassadors’ (aka the staff) showing a lack of care and empathy.
Adrian Pinsent, a TV cameraman, was doing a humble act of kindness - one that few people do in this day and age. He took a homeless man to Waterloo station’s Costa so he could pick out something to eat and drink.
But according to the Independent newspaper, staff refused him when they found out who the food was for. They said: “If we do that we will get prosecuted. It’s not our policy, it’s from the security of the station and the police.”
Another employee declined to serve him as well before Pinset slammed the money onto the counter and left with the food regardless.
In a world where the Ritz Carlton is praised for allowing employees to spend $2,000 to help guests and make their experience better, it’s easy to assume putting such policies in place won’t win the station or the company any brownie points. It’s like putting a “we don’t care” banner next to the logo - not something you want in the midst of carrying out reputation recovery efforts.
The next issue is that National Rail and Costa alike can’t remember ever putting such policies in place, meaning there was a misunderstanding somewhere down the line, or staff simply decided on their own to refuse service. Employees need to know that no matter how hard the working day or against certain people they may be, such behaviour should not be tolerated.
Pinsent said of the event: “It was an utter disgrace. I asked the homeless man to pick what he wanted, a sarnie and a Pepsi, and when I tried to pay for it, they refused. This argument went on for some time before I filmed the video."
“I was amazed. As a cameraman and journalist myself, I know that the idea of Costa being prosecuted by either the police or station security, as the barista suggested, is utterly wrong.”
To the Daily Mail, he further emphasised the behaviour of the staff member: “I had to get the last train so when I put the money down, I gave the homeless man the food. The employee didn’t speak to him, but did ask me ‘what about your change’ as I left, and I said 'forget about it' as I had to get the last train."
“They seemed concerned for me not getting my change, but until that point none of the staff spoke to him.”
With other coffee brands espousing the virtues of giving to society, and while undergoing reputational recovery efforts from last month’s scandal, Costa can’t afford for its staff to demean customers, whether employed or homeless.
Take Pret a Manger, for example. It launched the Make Someone Smile campaign in January. Every so often, a customer will receive a coffee sleeve with a smile on it. It is up to that person to “nominate” someone, a friend or a stranger that looked like they really needed it, to hand the sleeve in and receive a free coffee.
Kindness is increasingly becoming the new currency, and companies, especially those undergoing reputation recovery efforts, can ill afford to ignore it.