Is this marketing campaign a massive mistake? 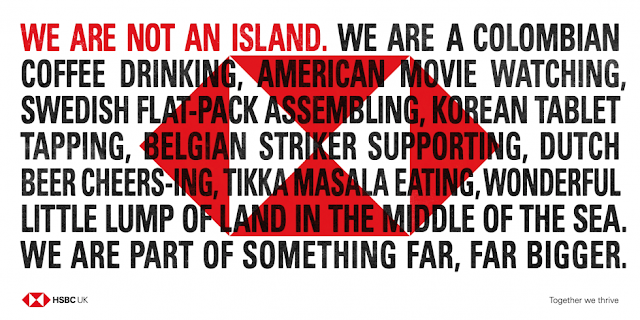 I was watching TV with my partner a few nights ago when one of the new Lloyds Bank adverts came on. If you are a reader in the UK then you will probably have seen it. It features a group of people from some remote village running to their local beach to watch a group of black horses run past.

At the end of the advert a cute young girl starts to stroke one of the horses and smiles into the camera. This is supposed to create a quintessentially British atmosphere, but I wonder how many viewers realise that it was actually filmed in New Zealand.
I commented to my partner that I thought this was a really stupid TV advert as it had absolutely no message or purpose, yet Lloyds Bank has been plugging this advert repeatedly on TV for the last few weeks. It's getting so boring.
But I think I've now just worked out why Lloyds Bank has decided to develop the type of campaign that attempts to create a subconscious 'feel good' atmosphere without actually saying anything at all about the bank itself.
I think the rationale behind this type of vague ‘say nothing’ advertising, is because the banks realise that whatever they say in their marketing materials, they will just face a barrage of criticism from people who are still angry about their unethical behaviour which indirectly resulted in the global economic crash of 2008.
So, with this in mind, it's just easier for banks to create vague awareness-raising marketing campaigns with obscure imagery that makes you feel good about the bank at an emotional level, without actually promoting any message about the bank itself or its products. In fact, this is exactly what the tobacco industry did for several years leading up to the ban on tobacco advertising in the UK in 2003. In other words, the less you say, the better.

So what about HSBC?
I personally think HSBC has made a massive mistake in launching a new advertising campaign which does the exact opposite to the Lloyds campaign, giving a strong message that many customers are interpreting as being 'politically biased'.
The new HSBC campaign (which includes billboards, press adverts and TV commercials) claims the UK "is not an island" and then goes on to talk about all the ways that Britain as a country is influenced by other cultures from around the world. Hmmm...interesting.
The TV advert, featuring British comedian Richard Ayoade, ends with the strap-line "together we thrive". In normal times this phrase would be regarded as almost meaningless. But thousands of people have complained about it on social media, claiming the adverts are intended to be ‘anti-Brexit’. And the advertising agency behind the campaign - J Walter Thompson - has amazingly almost confirmed this by saying the adverts are in response to the "current atmosphere" and to remind people that we are all global citizens "whatever the political climate".
If that’s not a political statement, then what is!?!
One social media user questioned whether HSBC risked "alienating a large number of potential customers" with this new campaign. And I would agree with them. Regardless of whether there was any political intention, in the current febrile climate within the UK, any advertising campaign that focuses on ‘internationalism’ and relationships with other countries is going to be interpreted by the public as being political, regardless of whether this was intended.
But perhaps even more damaging than the political aspects of the campaign, these new adverts put HSBC at risk of being accused of hypocrisy, as was perfectly summed up by the well-known journalist and broadcaster Tim Montgomerie on Twitter.
In his words: “We are an island actually - full of villages and towns your bank deserted; of cleaners you underpaid; and of money laundering and other laws you bent. Brexit was a response to the economy you helped decimate. Thanks for the lecture, but we’ll manage without it.”
There is no doubt that some HSBC customers will love this advertising campaign. But if their customer base reflects the country as a whole (as seen in the EU referendum) then around half of them will absolutely hate it.
HSBC has taken a massive risk in their new advertising campaign. Perhaps they should have taken a lesson from the Lloyds Bank horses running across an empty beach. Sometimes a boring and meaningless ‘feel good’ marketing campaign is exactly what customers want to see.