You have happy customers? So what? 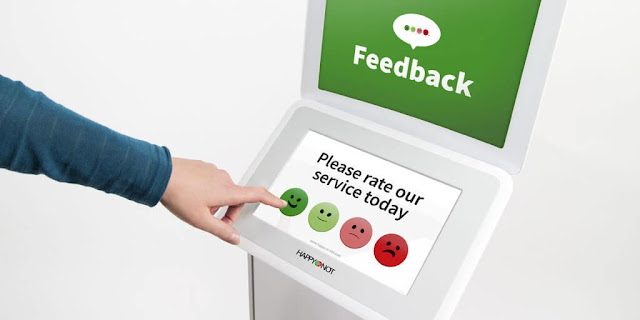 If you’ve been out shopping recently, you will have probably come across those strange little terminals near the exit to shops that invite you to press a smiley button showing whether you have been happy with your customer experience. Many of these terminals are run by a Finnish company called HappyOrNot.
The idea behind this customer feedback device actually dates back to the teenage experiences of the company’s founder Heikki Vaananen. As a 15-year-old growing up in 1990s small-town Finland, Vaananen would go to his local computer shop to buy floppy disks. Unfortunately, the man behind the counter was always unpleasant to him. According to Heikki: "He was always rude and dismissive. He'd deliberately ignore me, or not serve me. It made me very angry, but when you are young you don't know how to deal with it. I never forgot about it though."
Little did he realise that his bad shopping experience would one day lead him to create a multi-million pound business. Fast forward to 2008, and Heikki had become a successful entrepreneur and computer programmer. His video games business Universomo worked with some of the biggest names in the industry, including Sega, Disney, and Warner.
The company became so successful that Heikki sold up to an American buyer, and Heikki was looking for a new business idea. Remembering his teenage experiences, he decided to set up a company that helps organisations to monitor the level of customer service they provide.
His idea was to build feedback terminals where customers could answer questions about their experience. This could be a question about whether the staff were friendly enough, if a cafe's food was good enough or if they were happy with how quickly they were served.
The questions appear on a screen. The customer then simply presses one of four smiley faces indicating ‘very happy’, ‘happy, ‘a little unhappy’, or ‘very unhappy’. HappyOrNot then collate and email the data to their client.
"I thought it was a great idea," says Ville Levaniemi, HappyOrNot's co-founder. "But I was sure that someone must be already been doing something similar. I had a good search online, and amazingly they weren't. So we started planning the concept and in 2009 we launched the business."
Today, HappyOrNot is used by more than 4,000 organisations across 134 countries, including London's Heathrow Airport, the UK retailer Boots, the San Francisco 49ers American football team, US chain Shoe Station, and French supermarket Carrefour.
Ville had worked with Heikki at Universomo, and they used the money they raised from the sale of that business to get HappyOrNot up-and-running.
Their first big customer was one of Finland's 'big three' supermarket groups, which was initially looking to check on the freshness of fruit and vegetables in its stores. "They found that even in the best-performing stores, customers were not happy with the fruit and vegetables at certain times of the day," explains Ville. "So using the data we were able to give the company, it was, for example, able to make sure that there were fresh bananas to buy in the evening."
Soon HappyOrNot was looking for international customers. But as Ville explains, some companies were just not interested. "We have been laughed out of offices multiple times. Some companies didn't take us seriously. They didn't see the value of what we do. But what is particularly pleasing is the number of firms who initially said no, but then a few years down the line came back and say they want to use us."
In 2012 HappyOrNot got a major international break when Heathrow Airport became a client, and the airport is still one of the company's biggest clients. Today more than 25,000 HappyOrNot terminals are used around the world, and the company claims they been used more than a billion times, helping the company grow to an annual turnover of around £9 million.

The views of Customer Service Blog editor Darren Bugg
In theory, the HappyOrNot system sounds like a great idea to ensure good customer service. But I’m not so sure. As far as measuring customer satisfaction goes, this system is an extremely blunt instrument which needs to be used with a lot of caution. I'm concerned that most companies using the system do not fully understand the intricacies and nuances of customer psychology, and the dangers of using such a crude method of measuring customer satisfaction.
Think about it; what are you really going to really learn about your customers from just giving them four buttons to press? Very little.
For example, numerous academic studies have found that the majority of customers are either 'unhappy' or 'very unhappy' with their banks. Yet as has been mentioned several times on this blog, the vast majority of banking customers stay loyal to their banks, despite their unhappiness.
Conversely, research shows that most people are generally happy with their car insurance company, their energy provider, and their mortgage provider. Yet a large number of these 'satisfied' customers use price comparison sites on a regular basis to switch and change between the cheapest provider. Happiness does not always equal satisfaction. And satisfaction does not always equal loyalty.
So whether a customer is 'happy' is not a good measure of whether they will remain loyal. In fact it's not even a good judge of whether they feel 'satisfied' with their overall customer experience. People can go into a shop and buy a product that was cheaper than they expected. And they will go away from the shop feeling 'happy', even if the checkout operator was rude to them, and even if they experienced numerous other problems while inside the store. They will still press the button marked 'happy'.
The problem is that customer happiness, customer satisfaction, and customer loyalty, are not the same things. Of course there is some degree of correlation between them, but it is foolish for any organisation to think they have a 'satisfied' customer just because somebody pressed a button with the word 'happy' on it. And it's even more tenuous to suggest this customer will remain loyal.
There is also something that I call the 'TripAdvisor Effect'. Many readers will have heard of, and probably used, TripAdvisor to help them decide upon hotels, restaurants and other leisure activities. But as we all know, the people most likely to leave reviews on TripAdvisor are either very happy or very unhappy with their experience. This is why many of the reviews on TripAdvisor swing to one extreme or the other. The people who have had a mediocre experience, or who are 'mildly' happy or 'mildly' unhappy, tend to not bother writing reviews at all.
So the statistics that HappyOrNot are sending back to their clients are likely to be skewed by the 'TripAdvisor Effect' - showing an unusually large number of people who are either ‘very happy’ or ‘very unhappy’. The people in the middle are under-represented.
But the biggest criticism of the HappyOrNot system, is that it doesn't answer the most important question of why people are either happy or unhappy with their customer experience. It's all very well knowing you have got happy customers, but this doesn't tell you whether they are genuinely satisfied, whether they will remain loyal, and most importantly ... WHY.
This system of judging customer happiness might have made a lot of money for these two Finnish entrepreneurs. But personally I think it has the potential to do more harm than good in judging whether customers are really experiencing good service, and whether they are likely to remain loyal.
To see hundreds more articles click here to visit our archive