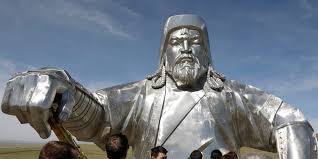 Genghis Khan was the first Great Khan of the Mongol dynasty and is often hailed as the ‘King of Kings’. He was the founding emperor of one of the largest contiguous empires - the Mongol Empire. Much of his leadership wisdom is still as relevant today as it was 800 years ago.

Khan conquered vast territories of Eurasia, including the modern day states of China and Korea, plus much of central and south-west Asia, and Eastern Europe. He held a reputation for being a tyrant due to his slaughter of common citizens during his escapades, making him one of the most feared rulers in history.

But despite his fearsome reputation, his political work brought the 'Silk Route' under one political environment, boosting the trade from north-east Asia into south-west Asia and Europe.

Apart from his military accomplishments, he was also responsible for inculcating religious tolerance and meritocracy into the Mongol Empire, and he was also accredited with the unification of the nomadic tribes of north-east Asia.

Khan was one of history’s greatest leaders, and much of his leadership wisdom is still relevant today.

Here are my 10 favourite inspirational quotes by Genghis Khan:

“An action committed in anger is an action doomed to failure.”

“There is no value in anything until it is finished.”

“A man's greatest joy is crushing his enemies.”

“Even when a friend does something you do not like, he continues to be your friend.”

“A leader can never be happy until his people are happy.”

“Conquering the world on horseback is easy; it is dismounting and governing that is hard.”

“The strength of a wall is neither greater nor less than the courage of the men who defend it.”

“As long as you brothers support one another and render assistance to one another, your enemies can never gain the victory over you. But if you fall away from each other, your enemy can brake you like frail arrows, one at a time.”