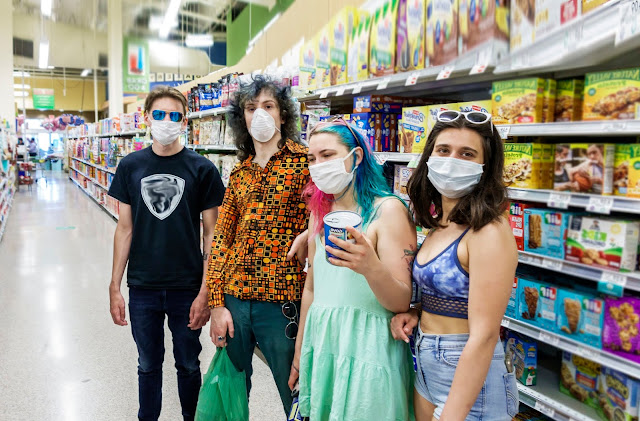 Regular readers of this blog will know that one of my ‘pet hates’ at the moment is the way that supermarkets in the UK have been openly ignoring the laws relating to wearing masks and face coverings during the coronavirus pandemic.

Like many of our readers, I have been horrified by the number of people allowed into supermarkets who are not wearing face coverings. Of course, there is the problem that many of these customers will claim that they are medically exempt (for example if they have long-term breathing difficulties, lung disease, or asthma).

But it's obvious to anyone with half a brain that most of these people refusing to wear masks have absolutely nothing wrong with them, and they see themselves as brave 'rebels' against government rules. Or maybe they are just mindless morons who don't care about the damage they are causing to wider society by flouting the law.

So when it was announced earlier this week that Morrissons supermarket were going to ban customers who refused to wear masks, it seemed like a step in the right direction.

The announcement by Morrissons was quickly followed by Sainsburys the following day. And then, as expected, their main rivals (Tesco, Asda and Waitrose) quickly announced that they would also ban customers who refuse to wear masks.

It might sound like good news that supermarkets are, at last, taking seriously their moral responsibility towards the health and safety of their customers. But wait a minute...

Are supermarkets being honest, or is this just a clever PR stunt?

Enforcement of face coverings is officially a police responsibility. However, supermarkets can deny entry to their stores (which are classed as private property) and can call the police if someone refuses to follow the rules or becomes abusive to staff.

But the police have said that there is not much officers can do to enforce the rules in shops because they are already too busy.

The Government’s Policing Minister Kit Malthouse said that the police would offer backup if things go seriously wrong. According to him: "What we hope is that, in the vast majority of cases, the enforcement put in place by the store owners will be enough."

This all sounds very vague and weak. Everyone knows that the police are simply too busy to be ejecting people from supermarkets who break the mask rules. And the supermarket staff will obviously not want to get into a conflict situation with a customer who refuses to wear a mask.

Just imagine the bad publicity it would create if a customer was forcibly ejected from a store and then it transpired that they had a genuine health condition that made them exempt from wearing a mask!

And how do they prove that they are exempt? Wait for it… this is almost unbelievable! If you want to prove that you are exempt, then you just go onto a Government website and download yourself a badge (that you print at home) which says you are exempt. You don’t need to give any proof whatsoever!! (If you don’t believe me, visit the website given at the end of this article).

What do the supermarkets say?

TESCO: A Tesco spokeswoman said the chain had decided to strengthen its policies: "To protect our customers and colleagues, we won't let anyone into our stores who is not wearing a face covering, unless they are exempt in line with government guidance. We are also asking our customers to shop alone, unless they're a carer or with children. To support our colleagues, we will have additional security in stores to help manage this."

ASDA: An Asda spokesman said if customers had forgotten their face coverings, it would continue to offer them one free of charge. But he added: "Should a customer refuse to wear a covering without a valid medical reason and be in any way challenging to our colleagues about doing so, our security colleagues will refuse their entry."

SAINSBURY’S: Sainsbury's said it did not have the power to deny entry to shoppers without masks. However, trials showed customers complied more when asked to wear masks by security guards at the door. In an interview with the BBC, Sainsbury's boss, Simon Roberts, said "we are not going to ban customers". But he urged shoppers to wear a mask and shop alone.

CO-OP: The Co-op also said it would not ban shoppers without masks from entering, and instead urged customers to take responsibility for wearing a face covering when visiting its stores, as it was mandatory by law.

ICELAND: Iceland said it would take a similar approach, adding the vast majority of its customers continued to shop in compliance with the law

WAITROSE: Andrew Murphy, the Executive Director of Operations at Waitrose, said: "We've listened carefully to the clear change in tone and emphasis of the views and information shared by the UK's governments in recent days. By insisting on the wearing of face coverings, we aim to make our shops even safer for customers."

But another Waitrose spokesperson also said "In view of the rising tide of abuse and violence being directed at our store colleagues, we do not expect them to confront the small minority of customers who aggressively refuse to comply with the law,"

Or, to put it in other words, Waitrose are not going to do anything at all when customers break the rules!!

This is all just an obvious Public Relations stunt by the supermarkets, who are effectively not going to do anything at all to protect their customers. What a waste of time!

If you want to find out what the official Government rules are relating to face coverings during the pandemic then click here.