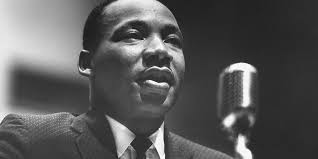 Back in 1988 and 1989, I spent six months living and working in the USA. I spent part of this time travelling around the country, and I managed to visit around half of the states in the entire USA.

One of the places I visited was Memphis in the state of Tennessee. While there I visited Graceland (the home of Elvis Presley) and also the Lorraine Motel in a very run-down part of the city. This was a pilgrimage for me, because I wanted to visit the place where one of my heroes was shot dead in 1968.

Dr Martin Luther King Jr. (1929 - 1968) was an American Baptist minister and activist who became the spokesperson and leader of the American civil rights movement from 1955 until his death in 1968. King promoted civil rights through non-violence and civil disobedience, inspired by his Christian beliefs and the non-violent activism of Mahatma Gandhi.

King led marches for the rights of black people to vote, desegregation, and other civil and working rights. King led the 1955 Montgomery bus boycott and later became the first president of the Southern Christian Leadership Conference (SCLC). As president of the SCLC, he helped to organise some of the non-violent 1963 protests in Birmingham, Alabama. King also helped to organise the 1963 March on Washington, where he delivered his iconic "I Have a Dream" speech on the steps of the Lincoln Memorial.

Today King is regarded as one of the great leaders of the movement for equality and civil rights around the world. These are some of my favourite inspirational quotes that he made during his short life.

"No person has the right to rain on your dreams."

"Faith is taking the first step even when you can't see the whole staircase."

"Our lives begin to end the day we become silent about things that matter."

"Only in the darkness can you see the stars."

"Intelligence plus character - that is the goal of true education."

"Injustice anywhere is a threat to justice everywhere."

"A genuine leader is not a searcher for consensus but a molder of consensus."

"I have decided to stick to love - hate is too great a burden to bear."

"In the end, we will remember not the words of our enemies, but the silence of our friends."

"That old law about 'an eye for an eye' leaves everybody blind. The time is always right to do the right thing."

"Those who are not looking for happiness are the most likely to find it, because those who are searching forget that the surest way to be happy is to seek happiness for others."

INTERESTING FACT: King's advisers recommended that he leave out the words "I have a dream" from his speech on the steps of the Lincoln Memorial in 1963. He chose to ignore them, and this became one of the most famous inspirational speeches ever made!