Are prices real? Do they even exist? 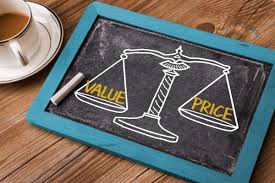 Many readers will already know that, in addition to editing The Customer Service Blog, I also do lecturing and training work in the areas of Business Studies, Management and Marketing. One area of business that has always fascinated me is the subject of pricing. It’s a subject that I lecture on at both undergraduate and postgraduate levels.

So just how do companies decide what to charge for their products? How can they make a rational decision on the level of prices to charge that will enable them to make enough sales, while still being profitable? If the price is too high then customers will buy from elsewhere. But if the price is too low, then the company might sell a lot of products, but make no profit from these sales.

While flicking through an academic journal this week, I came across a fascinating article by two mathematicians at the University of Portsmouth, who have taken a more mathematical approach to pricing.

As a lecturer in Business Studies, I would argue that there are many other practical considerations when setting the price of a product. But nevertheless, I think their article offers a really interesting theoretical view of the ‘perceived value’ of products, and the whole concept of attaching a ‘price’ to any product.

I have reproduced the article below, with permission under Creative Commons Licence.

Are prices real? How ghosts of calculus and physics influenced what we pay for things today

With inflation in the UK and around the world threatening to spiral out of control, prices of everything from milk to oil, energy and Christmas presents are a concern for most of us. Most people understand prices as simply the result of supply and demand - an agreement between sellers and buyers about how much something should cost.

But there’s more to these numbers, starting with the mathematically philosophical question: do prices even exist?

Suppose you are selling a bicycle to clear up space in the shed. You are a supplier seeking demand. You advertise for £100. You get an offer for £90, and ultimately strike a deal at £95. It is tempting to declare that the price of the bicycle was £95.

It is more accurate to view the situation as follows. Your initial £100 offer is a signal to buyers. The response of £90 from a buyer is a disagreement with your initial offer. The 'true' price lies somewhere in between. Paradoxically, as soon as the deal is struck, the price evaporates since there are no future deals to even consider.

During the disagreement phase, we could say that the price was between £90 and £100. Once an agreement was reached, the deal was executed and immediately the price no longer had any meaning. Was the price ever £95?

Suppose the buyer’s perceived value of owning this bike (including transportation benefit, status, enjoyment and so on) is £95. That means she will certainly not pay more than £95. Similarly, if the seller’s perceived value of owning the bike (including negative aspects such as space taken up in the shed) is also £95, then she will not sell for less than £95. It would seem that a deal is reached at £95. However, this disregards the inevitable extra costs and effort associated with executing the deal itself (time used and energy spent).

It is precisely because of a disagreement on the item’s inherent value that they executed a deal. All we can deduce from the £95 'price' is that the inherent value of the bike for the seller was less than £95, and for the buyer it was more than £95. In this way, both parties gained value from the exchange.

The £95 final price of the bike is borne by the tension of disagreement between buyer and seller. But any attempt to pinpoint it as a single number is illusory since as soon as the deal is struck, the price disappears. All we can really say, based on the interaction above, is that the 'true' price of the bike is between £90 and £100.

Ghosts in the system

How did prices, these ghosts of departed trading deals, rise to prominence? The answer lies with other ghosts. The fathers of modern physics, Isaac Newton and Gottfried Wilhelm Leibniz, developed calculus in the 17th century as a mathematical tool for physics. They manipulated infinitesimal numbers - elusive quantities that managed to be positive and zero at the same time. In 1734, the Irish philosopher George Berkeley in his book The Analyst delivered a famous critique of these ‘numbers’: He said: “They are neither finite Quantities nor Quantities infinitely small, nor yet nothing. May we not call them the Ghosts of departed Quantities?”

Towards the end of the 19th century, mathematicians laid calculus on solid foundations by constructing the 'real numbers'. Today, these are the default numbers we use every day, including 0, 1, 1.5, -1.323, and π.

In 1900 the French mathematician Louis Bachelier took a bold step. He saw the tremendous power of calculus and wondered if it could be utilised not just in physics, but also in finance.

Calculus works well in physics, engineering and technology because the real numbers aptly describe relevant quantities. For instance, your geographical position in Google Maps is pinpointed by real numbers (latitude and longitude), and tools from calculus are used directly on these numbers for navigation.

Bachelier needed a financial concept that can be measured by real numbers. The price concept, as elusive as it may be, fit the bill. It allowed Bachelier to model financial assets as if they were moving particles, and thus exploit the mathematics of physics.

The realisation that the real numbers were too restrictive for the purposes of modern physics led scientists to invent new mathematics. Classical physics, which reigned supreme since Newton and Leibniz, is now seen as the predecessor of quantum mechanics - a revolution that is reshaping our lives.

In their book Trades, Quotes and Prices, leading experts in econophysics poignantly describe the current situation in finance:

“Prices are fleeting quantities, hypersensitive to fluctuations in order flow and prone to endogenous crashes. So why do we put such blind faith in them? The belief that prices are faithful estimates of values of assets, portfolios and firms has dominated the study of financial markets for decades. Despite widespread adoption this approach has many unfortunate consequences. Perhaps it is time for a better paradigm.”

This call for a new paradigm is leading researchers to draw inspiration from the frontiers of modern mathematics. From the very recent advances of quantum mathematics to the depths of category theory, nobody yet knows what the answer is, but when they find it, it will surely shape the economy of the future.

This article is republished from The Conversation under a Creative Commons license.