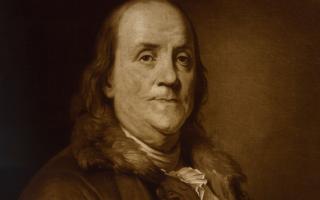 Benjamin Franklin (1706 - 1790) was an American writer, scientist, inventor, statesman, diplomat, printer, publisher, and political philosopher. Among the leading intellectuals of his time, Franklin was one of the Founding Fathers of the United States, a drafter and signer of the United States Declaration of Independence, and the first United States Postmaster General.

As a scientist, he was a major figure in the American Enlightenment and the history of physics, for his studies of electricity, and for charting and naming the current still known as the Gulf Stream.

Franklin is famous for numerous inspirational quotes, and below I have listed my 10 favourites.

“He that lies down with dogs, shall rise up with fleas.”

“Better slip with foot than tongue.”

“Look before, or you’ll find yourself behind.”

“No gains without pains.”

“Love your enemies, for they tell you your faults.”

“There never was a good war or a bad peace.”

“Dost thou love life? Then do not squander time; for that’s the stuff life is made of.”

“Wish not so much to live long as to live well.”